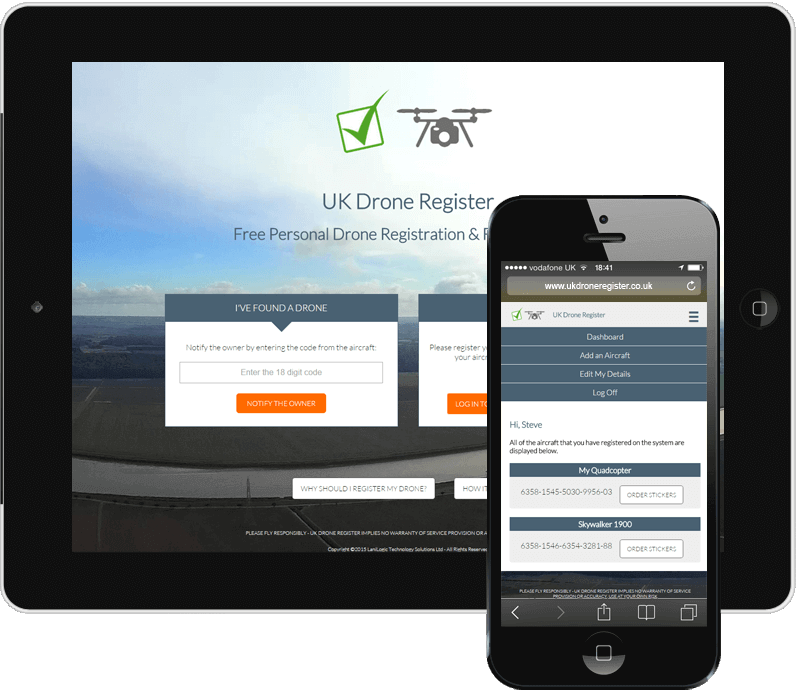 The drone industry has taken off in a big way (no pun intended, honestly!) with a massive influx of both commercial and recreational aircraft taking to the skies.

I have a personal interest in the hobby of "FPV Flying" which is essentially fitting a camera to these aircraft (whether it be a plane or a multicopter) and transmitting the video feed via a live downlink to some goggles that I wear, allowing me to pilot my aircraft as if I were sitting inside it.

One of the major problems with the hobby is that there is a LOT of money in the air at any one time - sometimes upwards of £1,000 and as with anything, sometimes "stuff" happens and the aircraft crashes at an unknown location. That's a big problem because not only have you just lost a lot of expensive equipment, there's no way for anyone to get it back to you if they come across it.

The UK Drone Register allows you as a pilot to register your aircraft, each being given a unique GUID as a reference number, and the resulting code can be printed out on stickers that are then placed on each aircraft. The code can then be entered into the website if someone finds the aircraft. The stickers also contain a QR code that, when scanned, will bring the finder to the same page.

Once scanned or a code entered, the finder can elect to notify the registered pilot of the whereabouts of their equipment. This can either be done in free text "i.e its at my house in 999 Letsbe Avenue" or using the location services built into a mobile device.

Once the finder send the notification, the pilot receives an SMS message and an e-mail, telling them where to find their aircraft. If GPS coordinates are supplied, a device such as a TomTom Navigator can be used to "home in" on the downed aircraft.

The website also displays safety notices at each stage of the notification process, warning the finder that the motors (and propellers) may start without warning and to prevent any injury to children who may be nearby.