Base Level Of Fitness - Week 4 (Live)

Man I don't think I've ever known it to be as hot for as long as it has been lately, especially not in this country - it's pretty much unheard of!

Not that I'm complaining much because it makes going out on the bike very pleasant indeed, at least later in the day once the scorching sun has gone down a bit.

Last week I made some good inroads (including a personal best) onto my plan of getting back to a basic level of fitness, so here is week four for anyone who's interested in keeping up with my progress.

I couldn't go out in the morning because of a puncture which was caused by a random thorn in my tyre so I nipped down to The Range and got a couple of new inner-tubes for the bike. I knew if I didn't do this first thing I'd put it off and then end up losing my daily streak by not going out, so it had to be done.

My god it was hot though when I was fixing the bike - I had it set up on concrete in the baking sunlight which was a huge mistake. Only took ten minutes though and then once I'd put the tyres up to 32psi with the car compressor I was back in business.

I left it until later on to go out though, simply due to the heat. I didn't fancy getting dehydrated and sunburned (again) but when I did go out I managed to bust my distance personal best and clocked 7.1 miles in just over half an hour which was nice.

Today I was feeling pretty tired. I think the heat has started to get to me if I'm honest, I need to up my water intake. I spent the day working because it was simply too hot to go out and when I did go out later in the day I was absolutely knackered, like I had no energy.

Of course it didn't help that I'd also had a roast chicken dinner about an hour before I started exercising, so it's hardly surprising that I struggled.

Never mind, I still managed a 3 miler before I came back in.

God dammit, I think I'm hitting some kind of wall. I don't know if it's the heat or whatever but I'm feeling particularly lousy today. I only managed to drag myself out on a short bike ride this evening and didn't even meet my minimum target of 3 miles.

I'm going to treat this as a wakeup call. and stop bullshitting my way into excuses.

Who am I kidding? I know what the problem is - I'm not sleeping properly. I went to sleep at 3am this morning and was up at 8am, so that's only 5 hours sleep and I've worked a ton today too. And that's after working out and working yesterday.

I'm burning the candle at both ends.

I need to start looking after myself - and I also need to stop this bullshit with only going for a single bike-ride in a day. Although I've not missed a workout yet, I've noticed I'm slacking, so I need to push myself harder and not put off my morning workout any more because that makes it easier to slack off completely.

Early night tonight, plenty of water and out on the bike first thing.

I can do this.

So as promised I went out this morning, not as early as I'd have liked but I forgot that the shopping was being delivered so had to stay in for that.

Anyway, the point is I went out rather than leaving it until later. Unfortunately I still feel like crap so I'm wondering if something is up, or maybe I do have a little dose of heat exhaustion. Either way I had very little energy and felt super-tense in the shoulders - I don't know, maybe it's anxiety / stress related, although I do seem to be having some sort of stomach issue at the moment as I keep burping and having terrible heartburn so maybe it's something to do with that.

My pace is still roughly what it always is, but this morning I felt like my legs were struggling and I just felt "tense" and drained so it felt like I was putting loads of effort in and had to come home. Rubbish.

I'll keep on with making sure my water intake is up to scratch today and see how I feel this evening, hopefully a little better.

So as promised I hit the road again this evening. Again though I was thwarted by what I'm starting to believe is the heat - I'm just so out of condition, I'm finding it impossible to maintain any kind of pace.

So again, it's only a short bike ride due to lack of energy and feeling "wobbly" which probably means I need to drink more and rest up a bit - which is what I shall do.

I didn't head out this morning because it was boiling hot again - instead I ramped up my fluid intake and got prepared for the evening ride. 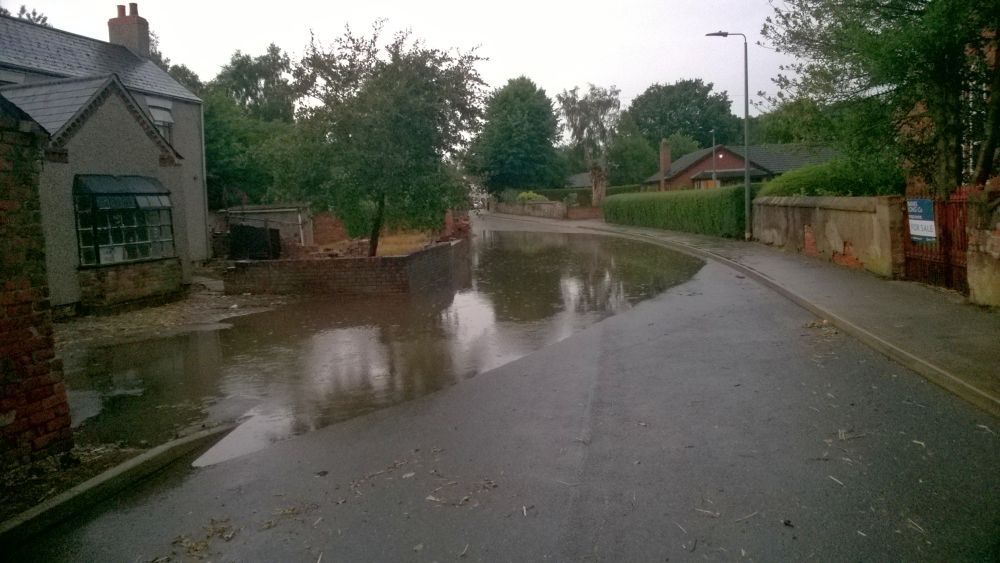 However - disaster! There was a monster thunderstorm and we got about 4 inches of rain in less than 10 minutes. I thought the gig was up and I was going to lose my 27 day streak of cycling but the clouds parted and I was able to very quickly do a two-miler!

I did manage to squeeze in a little weight training too so it wasn't a complete loss of the day but I do feel like I could have done a little better.

On the plus side, when I was out on the bike ride I felt much stronger so maybe my lethargy of late has been heat related as  opposed to something more sinister.

A wakeup call about nutrition

Tonight I went out on the bike and I really wish I hadn't. Not only was it mega windy so I could barely catch my breath on the home leg, I was so exhausted halfway around I actually felt giddy and was happy to have actually made it home without passing out. The bike ride was only short, yet I really struggled.

I really need to up my nutrition game - I've been drinking a ton of water but I eat very little fruit + veg in general which I believe is causing me to be running on next to nothing every time I exercise, and its resulting in my bottoming out extremely quickly.

In fact I felt like I was panicking, I got tunnel vision and felt anxious as hell even when I got home.

So, tonight I will be dropping by Tesco to pick up the following:

Hopefully that little lot will get me into a much better physical state so that I can get back to a decent level of exercise.

I'm 28 days in now (woohoo) and struggling badly the last few days (boo) - there's definitely something up and I feel like I need to devour loads of stuff. I've been craving fruit so obviously my body is trying to tell me something.

Best listen to it!

After yesterday I purposely avoided going out for a ride in the morning, choosing instead to concentrate on eating properly and keeping hydrated to see if it made a difference in my performance this evening.

The wind was pretty strong again so I knew I wasn't going to go very far and I elected just to do the straight down and up again route which equates to a single mile just to gauge how I felt.

Well I'm pleased to say that I did not feel fatigued at all so I think I have cracked what has been wrong - I've simply been suffering from lack of energy from a poor diet.

In fact the difference was extremely noticable - I wasn't even wheezing (which is what you'd expect on a short bike ride) whereas before I was struggling pretty much straight away when I first got on the bike.

So I guess what I have to do from now on is keep up on my my diet and make sure I take in plenty of fruit, vegetables and basically not exist on the same things my kids have. In actual fact when I think about it, I've been having two slices of toast for my breakfast - the same as my 4yr old and 6yr old sons... definitely not enough to sustain a 200+lb man.

Pretty obvious when you think about it, but this is all new to me so I'm finding things out as I go.

Just a quick one this evening - I left it until late again on purpose because I've been concentrating on eating and drinking properly to get my strength back up.

Again, I felt so much better even though it was just a short one, so it's definitely nutrition related and hopefully I'm on top of it now.

I ordered a new cage and bottle for my bike a little while ago and it arrived today so no more excuses - time for a little more distance more consistently from now on.

Bit of an achievement for me this!

Despite me being overweight and unfit and probably the worst person in the world for following through on anything exercise related, I (that being ME) managed to keep cycling up for 31 days straight with no missed days.

I'm already feeling like it's forming part of a habit - I get agitated if I haven't exercised because I fear missing a day, so I'm confident I'm going to keep it up. I'd be lying if I said I wasn't enjoying how I feel now too - I feel more energetic, I'm sleeping better and feeling more like I'm leading myself in life rather than being led.

Over-dramatic? Maybe - but I don't care, it's how I feel and I'm proud of this small accomplishment. Hopefully it'll lead to better things in the months to come.