DroneFinder helps to get your aircraft back home if it crashes or becomes lost, by letting anyone who finds it immediately tell you where it is using their smartphone. 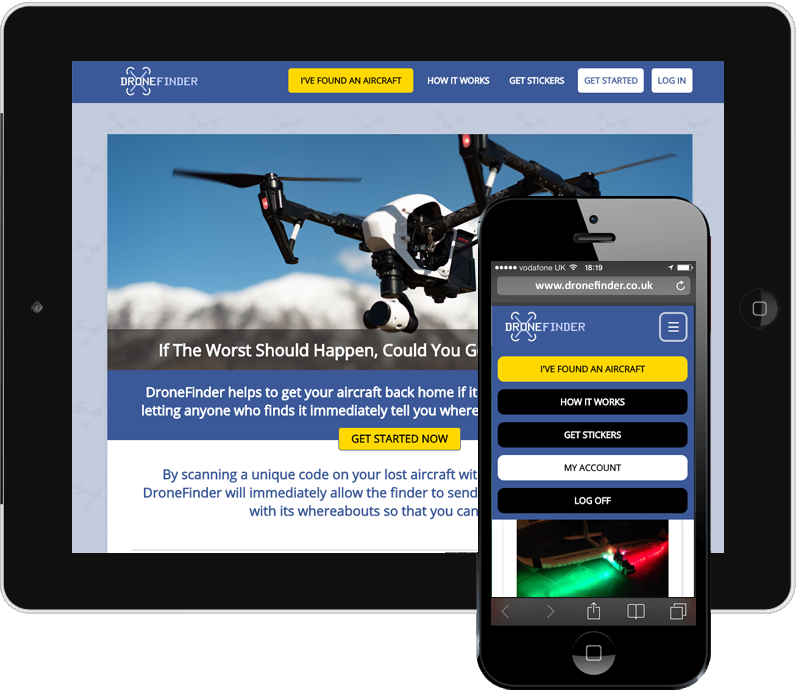 DroneFinder is built using ASP.NET MVC and C#, with a SQL Server backend and uses Linq2SQL to interface between the two. It is powered via ASP.NET Identity and uses Roles-based security to enforce login restrictions and to allow management of accounts.

Subscription and One-Off Payments are taken via PayPal using the Instant Payment Notification system, and customer e-mails are dispatched using the SendGrid API.

SMS messages are sent via the ClockworkSMS API and location services are provided with a mixture of on-device hardware, and the Google Location API.

DroneFinder is a project of my own creation, which I built to fill a gap in the market for an easy way of locating and returning lost drones (and other radio controlled aircraft).

As an avid FPV pilot who is heavily involved in the RC hobby, I became increasingly aware of the potential for losing my aircraft and all of the investment I had in it (which sometimes could be upwards of £500 including camera and autopilot equipment) if there was some sort of radio-glitch or other unforeseen incident.

If the aircraft went down away from home, there really was no way for someone to return the aircraft to me (short of putting my contact details on each aircraft) and, through the community forums, I became a little paranoid of suffering the same fate of others who had lost aircraft - their equipment was found by a member of the public, and sold for pennies on ebay.

Putting my contact details on my aircraft had two problems though:

1) I did not necessarily want anyone getting my phone number or address details, and
2) if I ever changed my details, there would be no way of updating the details on a lost aircraft should it be found months down the line.

So I began to think of a way to solve this problem with technology and came to the conclusion that although I had to put "something" on the aircraft to identify myself as the owner, it didn't necessarily have to be my contact details.

The result is what you see now  which is a SAAS application that work as a proxy between finder, and owner.

In addition, the application also displays warning notices to keep the finder safe - the aircraft may still be "armed" and the propellers could cause them some serious damage.

The website is subscription-based, so to keep an account active a monthly payment is taken via PayPal for each account. Sticker purchases are made individually and can be used on unlimited aircraft as long as they are set up in the owners online account.

So in essence, instead of having to purchase GPS trackers for each aircraft, you can pay a low monthly fee to help in the assistance of your aircraft if you do not know where it has disappeared to - something a "lost aircraft buzzer" won't help with.

Of course, the application does depend on the goodwill of a finder - there will always be some unscrupulous people out there who will not return the aircraft to its owner. However it is yet another tool in the arsenal to help make the ownership and use of the aircraft a little bit safer for all parties, and I'm happy to report that the application has a very active subscriber base and is beginning to provide a constant source of revenue which continues to grow month on month as the popularity of drones and other RC aircraft increases.

Did you enjoy this case study?

Why not give me a call on 07990 523015 or contact me for a no-obligation chat about how I can help - I have availability as of March 2022 and am available for both remote working and in-house projects subject to your location.